Now that I have finished a draft on the novel, I decided to stretch my brain a little and contribute to another of Chuck Wendig’s Flash Fiction challenges at Terrible Minds.  The picture below was to be used as our prompt. 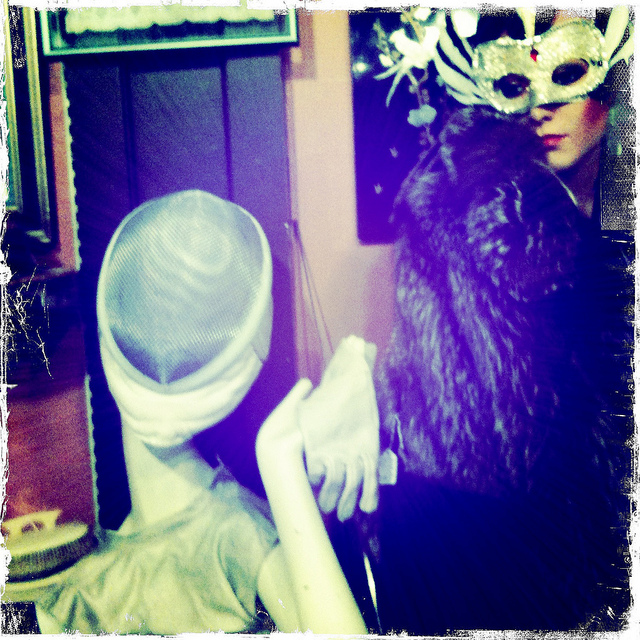 It had to have been the mask, Murielle was fairly certain at this point. The way it snapped over her eyes, like a peacock had sat on her face, feathers everywhere, tickling her nose and lip. She hated it.

“Just wear it until we’re inside, then you can take it off. If you wanted the fencing mask you should have said something,” said Jane. “It isn’t like I didn’t give you a choice.”

“Once we’re inside you’ll never even notice.”

Murielle sighed as her sister led her by the hand, through the curtain in the back of the store.

THE TIME TUNNEL was a run-of-the-mill costume warehouse, full of clown suits and rubber masks, some stupid hipster hangout Jane had been going on and on about. Murielle had come here simply to humor her.

It was oppressively dark in back. Murielle froze for a second. She could feel Jane turn.

“No,” said Murielle. “How much further?”

“Just a while longer,” said Jane. “I’m telling you, there’s nothing like this.”

Jane only laughed, a high willowy laugh that normally would have made Murielle feel right at home; this time it set her teeth on edge. It explained why she hadn’t heard from Jane in five years. Amazing she hadn’t been abducted. Idiot.

“Then, you just relax. And watch.”

“We’ll stand,” she felt Jane tugging urgently on her hand. “Once the lights come on we won’t have a choice.”

Old mannequins popped out of the shadows, white as ghosts, startling her as they rushed past. Feather boas brushed her face and fluttered like escaped birds. No, Murielle did not care for this at all.

Of course Jane was always the black sheep, the one coloring outside the lines. When Murielle went to college, Jane ran away from home and lived for a week on a train. When Murielle got her job at the law firm, Jane was finger-painting in a studio “Like a goddamn five-year-old,” Murielle had complained to their parents once.

“You and your sister are two sides of the same coin,” her mother had said. “You just can’t see it yet.”

And she still didn’t. All this running and tripping. It was a good way to twist an ankle or scrape a knee. She bumped into something small and soft and realized it was Jane.

“I don’t want to pose. I want to sit down and have a goddamn drink.”

“Look,” said Jane. “Remember that time we went on the Gee-Force?”

Her sister only laughed. “Well it’s a lot like that.”

“Great,” said Murielle, panic rising in her voice. “Don’t they provide seat-belts? A safety bar. This place is a lawsuit waiting to happen.”

A light, much brighter than she expected, came on and lit the room like a sun. Murielle felt her body stiffen, her heart sank. Her feet seemed to stick to the floor. She tried to open her mouth to scream, run, anything, but nothing worked anymore.

I’m dying, she thought. My brat sister has gotten us killed!

But after the sensation faded–or maybe she had just gotten used to it–Murielle noticed other people, a dozen or so, all frozen, mannequins.

Oh God, she thought. Is that me? Am I stuck in that awful 80’s movie? I am going to fucking kill my sister when this is over.

In front of her was a huge window looking out onto the corner of 5th and Market. People walked along the sidewalk, parents holding their children’s gloved hands as the first flakes of snow fell.

Snow, she thought. In July?

A man sat there on the corner, a cup in one hand and a sign: ANY HELP GOD BLESS. People ignored him as they walked past, the snow piling on his shoulders. He stayed there, cup held out, not a dime falling into it.

An hour went by, then another. Murielle felt no discomfort despite the prison her body had become. It forced her to notice little details in the man’s beard, his tattered clothes, the way he nodded and said “Merry Christmas” behind the muting glass.

More hours passed and the man sat, collecting nothing, shivering in the cold. Wasn’t anyone going to help him? Jesus. A fucking quarter. Get that man a cup of coffee. Something.

And still he waited. He waited until the sun came up and the snow had turned to dense slush on his back. They watched as his shivering ended and he turned to a frozen statue on the pavement.

Then the curtain came down, the lights went off and Jane led her through the darkness again. “What did you think?”

“A cellphone, for fuck’s sake!”

“Did you see anyone on a cell phone, Sis?”

Murielle froze momentarily in her frustration and confusion. They stepped out into the warehouse where other people removed their costumes in silence. She blinked away tears at her sister.

“You sure didn’t pay very close attention, did you?” said Jane.

“You didn’t see the newspaper?”

Then Murielle remembered what she didn’t see. Not a single Prius, or Civic, just huge, old metal things with massive chrome bumpers and ornaments. The coats the children wore, like something from an old 1960’s cop show. The concept of cellphones suddenly seemed ludicrous.

She looked at Jane, who smiled back at her from under the letters of the store sign.