I wrote this for the 40th cycle of Flash Fiction Friday this week. The picture below is our prompt. It weighs in at just under 1000 words. 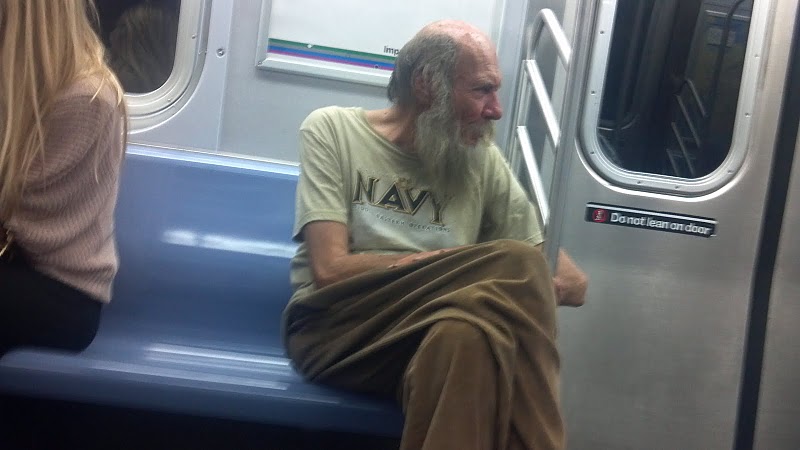 “Can you spare any change?” he asked.

It wasn’t a lie, really. I don’t carry cash. Everything I buy is with a debit card these days. He nodded as if he understood and continued to stare down the car.

He smiled and I counted all of five teeth. He scratched his chest a little under the faded NAVY T-shirt that seemed too big for him.

He looked at my iPhone. “They’re getting smaller every year,” he said.

“They are.” I unconsciously withdrew the cell phone into my pocket. He only smiled.

“In about five years, you’ll be ditching that for optical inserts and a subcutaneous power matrix.”

“That phone,” he said. “In about three years they’ll admit it’s been giving people cancer. Everyone will switch to graphene matrices that don’t fry your brain.”

Ten stops left on the subway and here I was, trapped with a loon. I thought about getting up and moving, but all the seats were taken except for the ones directly next to him. People swayed standing in the aisles. Nobody was listening to us.

“Name’s Leopold,” he said, holding out a hand. “Friends call me Leo.”

I looked at it for a minute and then shook. He had a firm grip.

He thought for a moment, then said. “What day?”

“The fifth of August.”

“Phil, I normally don’t do this, but I would highly advise that you get off the train along with me.”

“You wouldn’t believe me. You’ll just have to trust. You won’t want to be on this subway in fifteen minutes or so.”

He leaned across the aisle. “I was part of an elite military team when I was younger.”

“No,” he said. “But you could say we were the successors.”

“Phil, I have no doubt you will think me crazy for telling you this, but you seem like a nice guy. I am from the year 2073.”

And there we have it, I thought. I leaned back in my seat, staring at him. Eight stops left.

“Told you you wouldn’t believe me,” he said.

I shrugged. “Do you blame me?”

“Not really,” he said, looking out the window a moment.

A wry grin crossed his face. “Don’t believe me but wanna hear the story anyway, I see.”

“I fought in World War Two,” he said. “They sent us back as monitoring police. we make sure that no one tampers with the primary timeline, you see.”

“Ok, look,” said Leo. “If you could go back in time and kill any person, who would you kill?” He raised an eyebrow.

“Hitler,” said Leo. “And don’t pretend like you were going to say anything else. Everyone and their uncle wants to kill Hitler. He is the great white buffalo of time travelers. Everyone thinks that if you kill Hitler, you’ll fix everything. You kill him at fifteen and the war would never happen. The Jews would be spared, the Japanese never would have invaded. The Italians would have come to their senses. Millions of lives saved, you see? But it causes unforeseen problems, power vacuums, political instability, things you could never predict.”

He coughed and continued.

“I was his secondary school teacher. My job was to save him from any idiot who might go back and try to assassinate him. My relief operative arrived late. When I went to the rendezvous portal, it was gone. I hitchhiked out to France, took a ship to New York and have been waiting ever since. The fact that we are having this discussion is proof that my associates are still doing their job.”

“Why live on the streets then?”

“Can’t leave a footprint. Anything I do might upset the continuum. But seeing as there is a portal opening in a couple hours in Brooklyn, I don’t mind telling you.”

“And why should I believe you?” I said.

He leaned across the aisle and pulled the sleeve back from his upper arm revealing a dark tattoo. As I watched the image it moved, swirling into complex graphs and patterns.

“No signal. It malfunctions in the split time-space reality,” he said. “Otherwise I could give a better demonstration.”

“That’s amazing,” I said, watching the surface of his skin move. “And you say you come from the future?”

“And you were there to protect… who again?”

‘Never heard of him.”

We stared at each other as the color drained from his face.

“I sure hope you are fucking with me, son.”

His breathing shallow, Leo grabbed his chest. His red IMPERIAL SYMPHONY T-Shirt bunched between his fingers as he rolled from his seat, his face pale. The doors opened and I stepped around the man as he lay still on the floor.

I would have stayed, but I was late for a meeting with NationCorp about another merger. I walked out the train, across the ubiquitous red banners, crosses and golden eagles (all praise be to the Leader), wondering if there was a grain of truth to his warning. Maybe another one of those Free Democratic Party terrorists would strike again. It wouldn’t take a time traveler to figure that out with attacks every week. At least his story was entertaining. Too bad about the heart attack.

I still wish I had had time to get a better look at that tattoo, though.